There are many types of SSDs (solid state drives) and it can be overwhelming when deciding which SSD to purchase for your next storage upgrade. The good news is, SSDs are more affordable than ever and in this article, we’ll break down the major differences between M.2, PCIe NVMe and SATA SSDs. 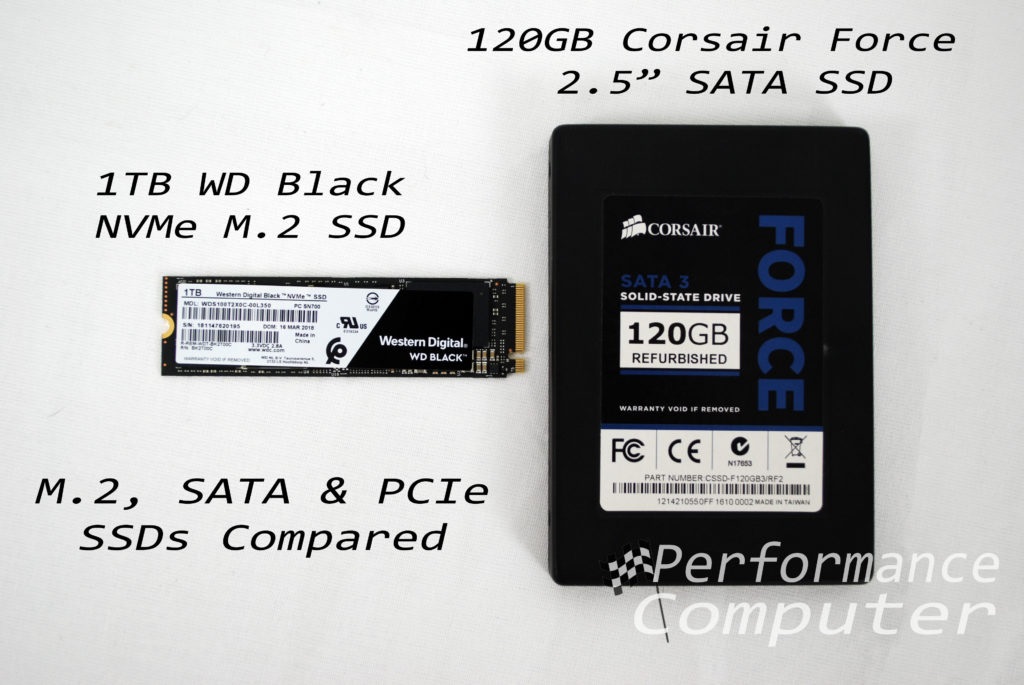 M.2 is what’s known as a form factor. The M.2 connector has access to the PCI-express 3.0, SATA 3.0 and USB 3.0 bus, depending on what type of M.2 device is connected. In addition to SSDs, the M.2 form factor encompasses Wi-Fi, Bluetooth, GPS and NFC modules. This form factor is our favorite because of its versatility and the size of M.2 devices.

M.2 SSD drives are very small;their diminutive size is often compared to a stick of gum. M.2 SSDs are connected directly to the motherboard in an M.2 socket as opposed to traditional SATA based drives that rely on using cables to connect to the motherboard and power the drive. M.2 SSDs are a huge leap in technology as solid state drives, and hard drives for that matter, were always connected via cables. The lack of cables makes M.2 drives ideal for SFF (small form factor) systems that have little room for cable routing. 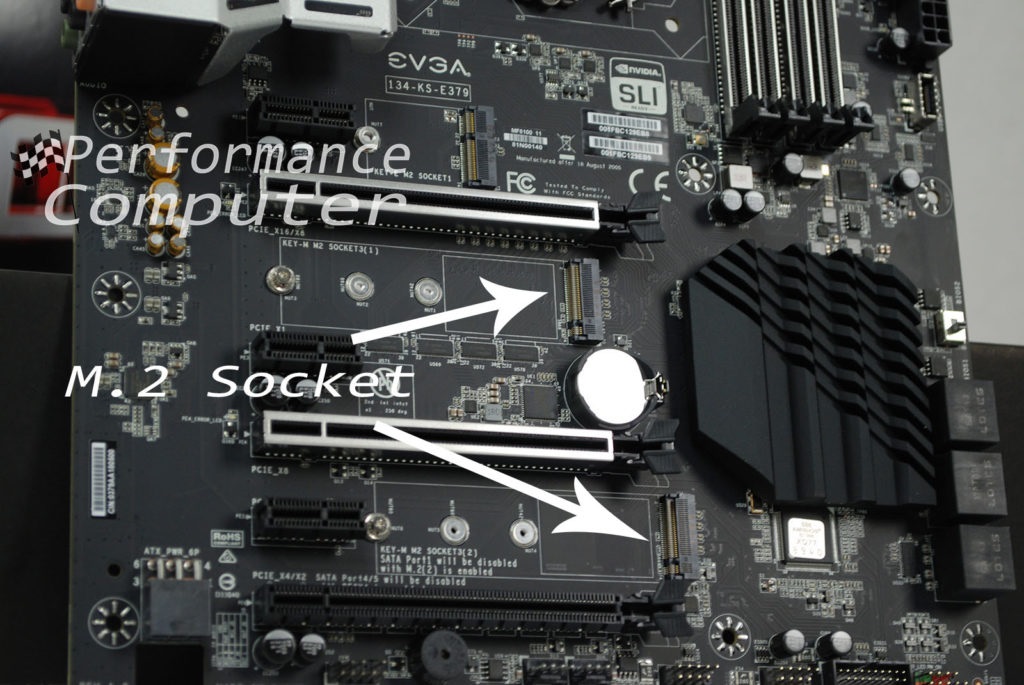 There are two primary types of M.2 SSDs, those that use the PCIe bus (these are commonly known as NVMe SSDs) and those that use the SATA bus. There are also different lengths of M.2 SSDs. The most common are lengths are 2242, 2260 and 2280. The number “22” is the value of the width of the M.2 drive in millimeters (mm). The numbers after that, “42”, “60” and “80”, represent the length value, again in millimeters. Longer drives can accommodate more NAND flash chips and therefore higher capacity drives come in the 2280 (22mm x 80mm) size.

A common misconception is that M.2 SSDs and SATA SSDs are two completely different types of SSD. M.2 as covered above, is a form factor and SATA is a bus type. SATA SSDs come in both 2.5” and M.2 form factors. The 2.5” form factor is what most people associate with an SSD;it requires two cables (data and power) and is mounted in the computer case. M.2 SATA SSDs on the other hand, posses the same exact performance of their 2.5” counterparts and plug directly into the motherboard, eliminating the need for cables.

For example, the Western Digital Blue is a popular SSD among system builders. Western Digital makes both a traditional 2.5” version and an M.2 form factor version, both of which are SATA based.

The M.2 WD Blue SSD offers the same performance as the 2.5” version without the need for SATA power and data cables. Even better is the fact that there’s no price premium for the M.2 version. All that’s necessary is a compatible M.2 slot on your motherboard. If you do not have an M.2 slot, you can purchase an M.2 PCIe adapter which is installed like a graphics card;the M.2 SSD is installed in the adapter.

Perhaps the most exciting feature of M.2 based SSDs are the NVMe (non-volatile memory express) based models that connect via PCI-express. SSDs are essentially high-speed memory similar to RAM, but because SATA 3.0 was only capable of 6GB/s, SSD speeds eventually plateaued. By directly accessing the PCI-express bus, rather than the antiquated SATA bus, NVMe drives can run at the speeds flash memory is capable of. NVMe technology allows SSDs to unleash their true potential: blistering fast read/write speeds. 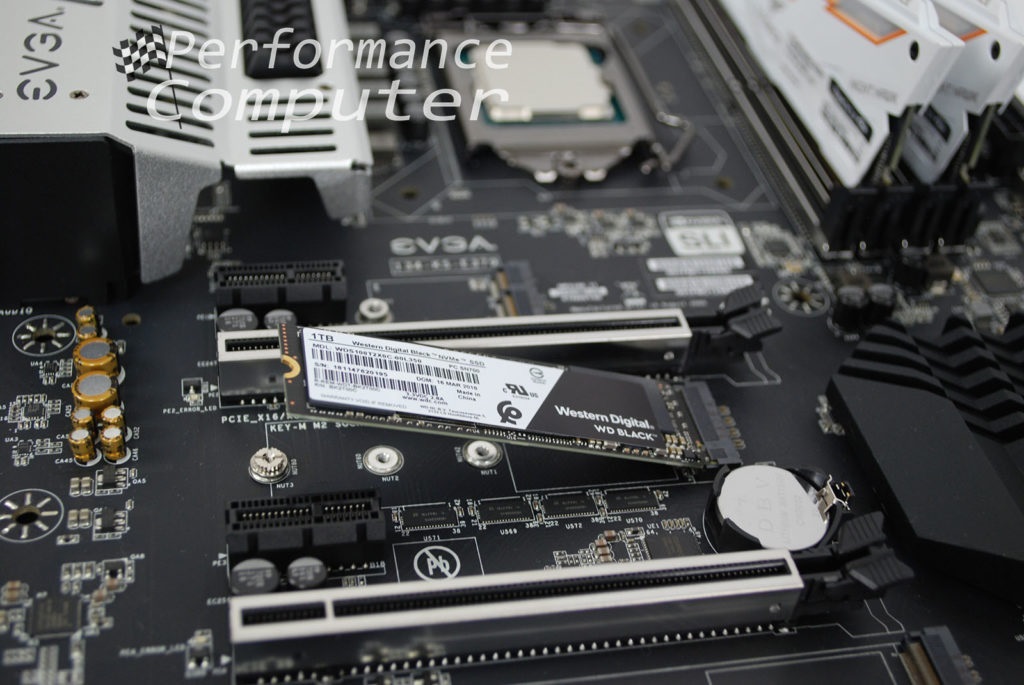 NVMe SSDs yield a 4x or more increase in speed compared to SATA SSDs! Just as upgrading from a hard drive to an SSD makes a monumental difference in everything from boot speeds to file load speeds, upgrading to an NVMe SSD will yield even more gains in a variety of computing tasks. Here is a breakdown of common speeds from various types of computer storage: 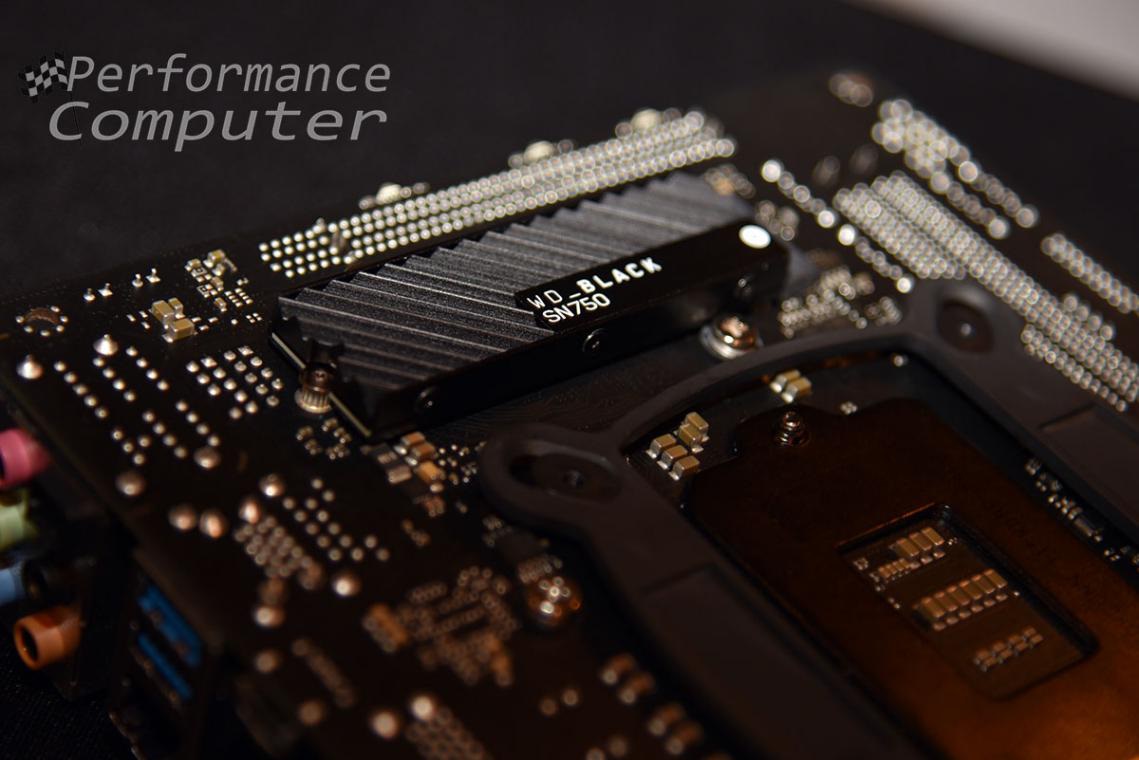 Our current top pick NVMe drive is the lightning fast 1TB WD Black SN750 NVMe M.2 SSD. At $150 the SN750 offers unmatched performance and will likely be the most meaningful upgrade you make to your current desktop or laptop. Just be sure that your motherboard has an available M.2 slot and supports PCIe SSDs. Most modern motherboards support this feature, some older boards had an M.2 slot but it was only able to connect to the SATA bus. Without PCIe support, you will not experience the increased speeds of NVMe drives. 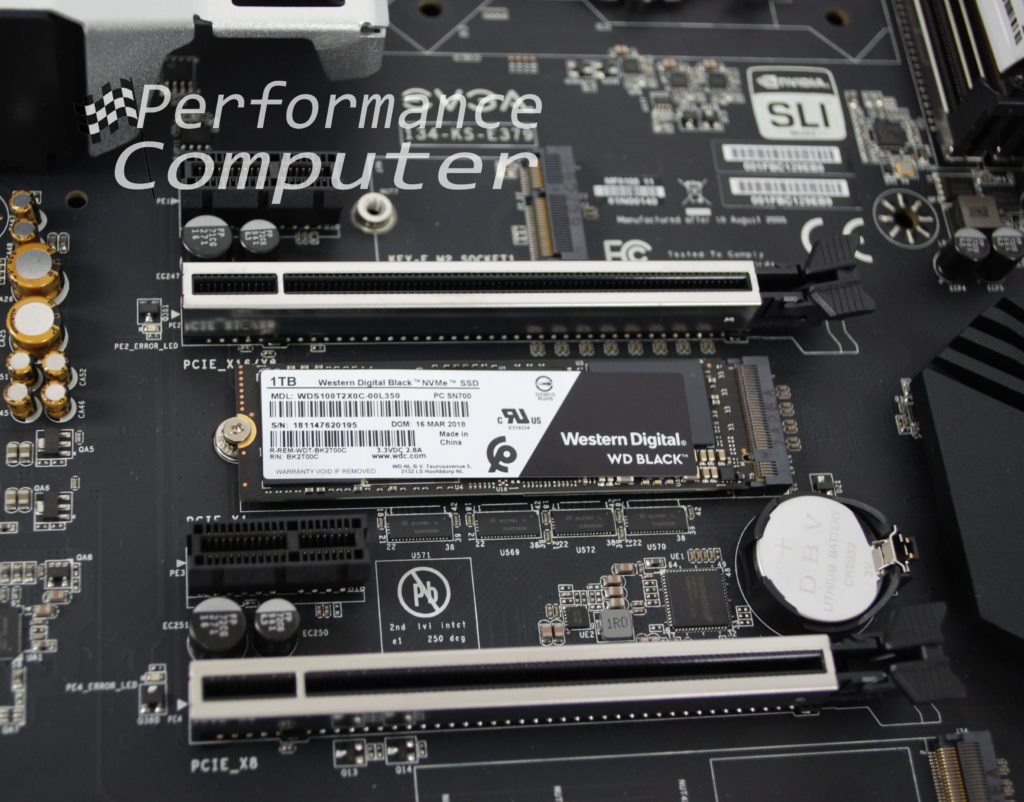 To access these speeds, you also need to make sure your operating system is installed on the drive. Commonly used programs, games and data will benefit the most from an NVMe drive.

As you can imagine, SATA (Serial ATA) is an older storage technology;more specifically, SATA is a bus type similar to PCI-express, though considerably slower. The SATA bus type dates to 2000 and replaced PATA (Parallel ATA) as the storage standard in desktop and laptop PCs. SATA brought faster speeds and a universal connector. SATA drives require a SATA power cable as well as a separate SATA data cable unless you are using an M.2 SATA based SSD. Common SATA devices include 2.5″ SSDs, 3.5″ hard drives and 5.25” optical/Blu-ray drives.

While in 2000 SATA was a relatively new standard, hard drives (and SSDs if you can believe it) had been around since the early 1970s and aside from taking up less physical space, they were still incredibly slow. When SSDs became mainstream in the mid-2000s, they used the 2.5” form factor and connected via the SATA bus. Despite using the SATA bus which was not designed for flash based memory and would eventually become a bottleneck, SATA SSDs offered tremendous speed increases even over 7200RPM and 10,000RPM hard drives. The first SSDs were expensive;high capacity SSDs were prohibitively expensive. A common solution for computer owners who wanted the faster speeds that SSDs offered but couldn’t afford the large capacity drives was to purchase a low capacity (usually 32GB or 64GB) SSD and use it to speed up an existing hard drive via “caching”. 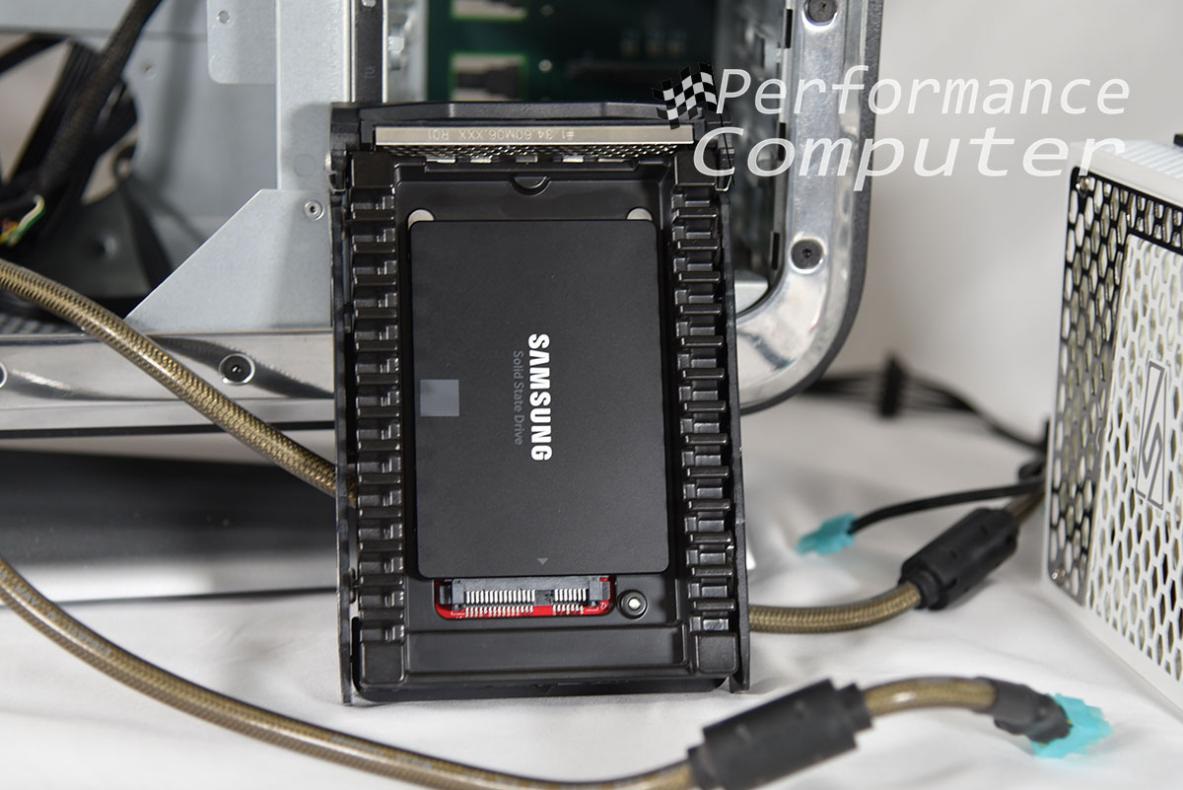 Furthermore, the first SSDs released were “slow” by comparison to modern SATA based SSDs, so at the time, SATA was a viable standard to use. SSDs brought with them great potential and manufacturers knew a new standard would eventually need to be created to take advantage of memory-based storage’s full potential, hence the creation of NVMe based M.2 SSDs that took advantage of the high speed PCI-express bus.

Storage has changed quite a bit over the past few years. Before SSDs, hard drives were the only type of storage that we used, and boy were they slow! We didn’t realize how slow at the time but when SSDs arrived, they were life changing. Few PC upgrades can truly claim that distinction!

As SSDs have evolved into M.2 based PCIe NVMe drives, again we benefit immensely from increased speeds and a much more convenient form factor. While not as life changing as upgrading a hard drive to an SSD, upgrading to an NVMe SSD is still very noticeable and is an upgrade you won’t regret.