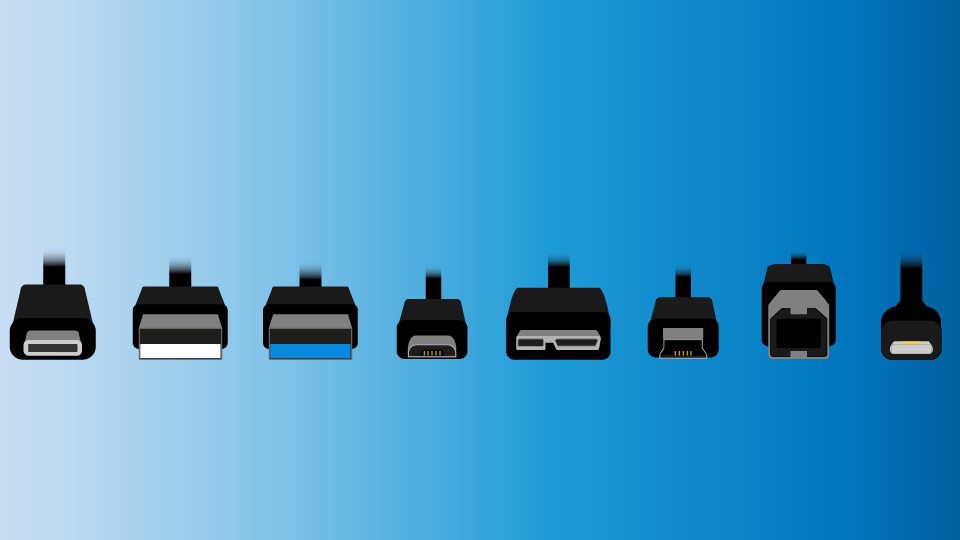 Things change so quickly in the tech space that even professionals sometimes find themselves stymied by the incessant and confusing terminology surrounding certain protocols (like the ones we're going to discuss today - Thunderbolt and USB). I remember the days of 8-track tapes, but I also remember when tapes were surpassed by CDs, and CDs were surpassed by MP3s, and now how MP3s are being taken over by streaming music sources. Thinking back on those days, I was constantly barraged by new terms every day that made it difficult to slog through the buzzwords: single- and double-layer CDs, WAVs, AAC, OGG, and MP3s. I longed for the days when I recorded music to a cassette from my boombox (from AM radio stations, no less) and had to manually rewind it with a pencil stuck through the tape spool.

The same goes for Wi-Fi protocols. Yes, I remember baud modems and BBS groups and ICQ messaging. Now you kids come along with your newfangled LOLs and DDoS attacks and dual-band, tri-band rock band routers and 802.11 ac—what happened to good old-fashioned 802.11 a, b, g, and n? All relegated back to the alphabet, it seems, to be replaced by new combo terms like 802.11 ac and ax. Punk kids with your fancy Internet and your loud music.

The same thing is happening to connections. If you were using and fixing computers back in the Pentium processor days, then you may remember the pain of trying to hook up peripherals to your computer. Your mouse and keyboard needed a dedicated PS/2 connector or serial port (oddly enough, many motherboards still have this as an option). Your printer? Probably a gigantic parallel port connector that was about the size of a small flash drive these days. External hard drives? How about an old SCSI connector? And how about adding a ZIP drive with a colossal 100MB of space—that’s the equivalent of 85 floppy disks! I think you can find them on eBay, and they come with a free set of dentures.

USB took care of all of that by adding a “one ring to rule them all” mentality, with an interface (Universal Serial Bus) that was supposed to uniformly combine the speed and ease of a single interface into one connector. Unfortunately, no one told Apple, which continued to offer less popular connectors such as Firewire 400/800. USB 1 debuted in 1995 with an amazing 12 Mb/s of speed. Always concerned about backward compatibility, the USB 1.1 protocol came along, which allowed the speed to decrease to 1.5 Mb/s for slower devices. By the time USB 2.0 showed up in 2000, the speed had jumped to a whopping 480 Mb/s, and ports were backward compatible with older USB 1.1 devices—which meant your USB 1.1 device could work in a USB 2.0 port, but a USB 2.0 device would not work in a USB 1.1 port. In the same year, USB flash drives became a thing, and users were able to transfer data easily between a computer and flash drives at an appreciable rate and at a higher capacity than before.

It’s never enough. Along comes USB 3.0 (also referred to as USB 3.1 Gen 1) with superior transfer speeds of 5 Gb/s (you read that right). It’s backward compatible with USB 2.0 devices, but it will only transfer at the host computer port speed;in other words, if you use a USB 3.0 port with a USB 2.0 device, the transfer speed will only top out at 480 Mb/s. As if this weren’t as confusing as pre-calculus, we now have USB 3.1 (also referred to as USB 3.1 Gen 2), with an amazing transfer rate of 10 Gb/s, and the ability to transfer at that rate over a standard USB 3.0 cable. So if you have a USB 3.1 host port, and a USB 3.1 device, but are using a USB 3.0 cable, you’ll still see speeds of 10 Gb/s. So that’s it in a nutshell, right? Wrong. Use the chart below to get your head around USB speeds, and then we’ll talk about USB Type-C and Thunderbolt™. 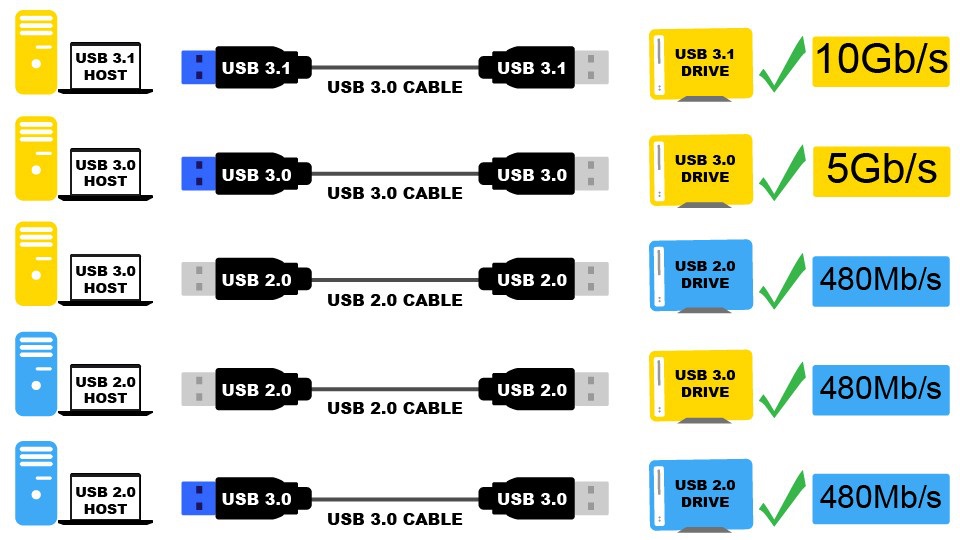 Okay? Now we have USB Type-C. USB Type-C isn’t about the speed, it’s about the design. Before all of this, USB connectors came in different sizes: Type A, Type B, mini A, mini B, micro AB, and micro B. Sometimes, finding the right cable for your device was even more confusing than figuring out your USB speed. You also had to determine which was the correct orientation for your cable—some connected in specific configurations, and flipping a cable around in the dark or behind a cord-crowded PC was a pain. USB Type-C goes in either way, upside down or right-side up, taking the guesswork out of the plug-and-play game.

The USB Type-C connector can potentially provide up to 100 watts of power, so you can use it to power and charge cell phones, laptops, and tablets, as well. Whether or not your port or device can be powered is determined by the logo. The Power Delivery (or PD) ports are signified by a battery symbol around the logo (see below).

Another new feature of the USB Type-C connector is its ability to send DisplayPort signals over the same cable and connector as USB signals;once a defining advantage of Thunderbolt over USB. This allows users to hook up external displays over the same simple port as their mice—nice! Unfortunately, not all computers with USB Type-C ports have to support DisplayPort over USB Type-C, so be sure to check your computer’s specs since compatibility is not guaranteed.

So now that we’re finished with USB types and connectors, let’s move on to Thunderbolt. Thunderbolt is a transfer technology (developed by Intel®) that provides PCI Express data and DisplayPort functionality in one cable. The chart below shows the advancements made in Thunderbolt speeds and how it compares to other protocols.

Thunderbolt also allows you to daisy-chain more than one peripheral to your existing connection. Because of the host-to-user design of USB technology, as opposed to the peer-to-peer design of Thunderbolt (and FireWire before it), USB could never connect more than one peripheral in a “chain” to your host computer —imagine using one computer, connecting an external USB hard drive to it, then trying to connect another USB hard drive to that one, and so on. USB can’t do that (unless you use a hub), but Thunderbolt can, with up to six devices. USB is also not bi-directional, which means that you can't transmit and receive data at the same time, while Thunderbolt can. Also, because Thunderbolt uses a PCIe bus, you can even add external graphics cards to Thunderbolt-equipped computers, something you can’t do over a USB bus. New USB Type-C connectors will also be directional, but that function will only be available with Thunderbolt host ports. While the original Thunderbolt and Thunderbolt 2 ports used mini-DisplayPort connectors, Thunderbolt 3 uses the USB Type-C connector for all needs. The “one cord to rule them all” is finally here.

Will Thunderbolt 3 take over all transfer protocols in technology’s near future? It certainly is appealing, with its 40 Gb/s speed and USB Type-C connectivity. It also appeals to creative professionals in audio and video recording, with its ability to transfer large files quickly for near lossless experiences. But until we see Thunderbolt 3 added as a feature to more laptops and desktops, it remains on everyone’s wish list. Hopefully, this primer on USB 3.1 vs Thunderbolt 3, with a side selection of connector types, will help you make the right decision when purchasing new equipment this season.

Have any questions, comments or concerns? I know I couldn’t include everything in this short primer, but if you have anything to add, do so in the Comments section, and we’ll get back to you as soon as we can! 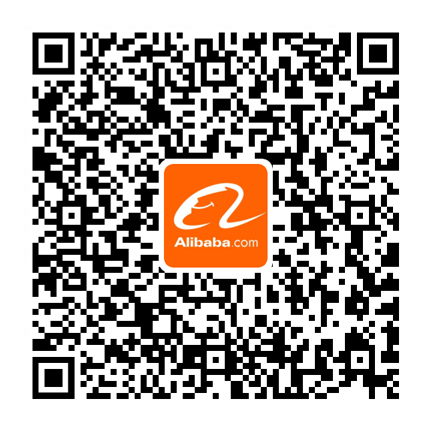